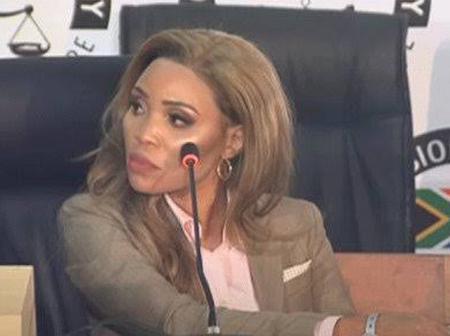 Former Finance Minister, Malusi Gigaba, has on Thursday slammed his estranged wife, Norma Mngoma’s testimony as fabrication, saying she utilises the information gathered from comments in the media.

Giving evidence at the Zondo Commission of Inquiry, Mngoma also described how Gigaba’s relationship with the Gupta brothers was corrupt.

Mngoma told the commission she accompanied Gigaba to the Gupta brother’s compound in Saxonworld more than 20 times since 2011.

Sometimes Gigaba visited the Guptas with his bodyguards.

Mngoma said that Gigaba usually visits the compound to have a meeting with Ajay Gupta, adding that sometimes they went there for lunch.

“We were also required to leave our phones inside a designated area during our visits, and help us to get into the room with our son.  Gigaba will then go to another room to meet with Ajay.

Mngoma testified that these meetings lasted for about one or two hours.

In one of our visits, Gigaba was carrying a black bag. When we got back home, he went straight to the study room carrying the same bag.

“After our nanny told me that our son got sick, I followed him into the study room. When I got there, he was furious and hiding something. He then asked me why I should get into the room without knocking at the door. I then realise that the bag contained a large sum of money, and he was packing it in a safe.”

“I asked him why they gave him the money, and he said it was a donation from the Guptas to buy ANC elections campaign T-shirts.”

Gigaba told the commission in an affidavit that Mngoma is fabricating her testimony, gathering her information from comments in the newspapers.

Mngoma told the commission she was surprised by how Gigaba defended the Guptas after being accused of corruption. Even when people complain about the corrupt Gupta brothers, he would still claim that the family is bringing business into the country.