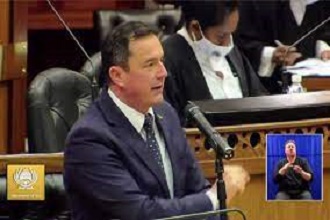 The DA rejected a call by President Cyril Ramaphosa to not interfere in the African National Congress (ANC) internal affairs.

“We will call a national emergency debate in Parliament to discuss the dangers posed by the ANC’s internal divisions and the need for restoring democracy,” said DA leader, John Steenhuisen.

Ramaphosa said that he and the ruling party did not comment on the internal bickering within the DA.

DA leader John Steenhuisen’s remarks come after the ANC suspended Magashule, who in turn defied the order and attempted to suspend Ramaphosa as party president.

He said that the internal conflict within the ANC could lead to disaster.

Magashule fired the first shots in what is shaping up to be a chaotic war within the ANC, according to Steenhuisen.

The ANC deputy general-secretary, Jessie Duarte, handed Ace Magashule a letter on Wednesday last week, informing him of his suspension.

The matter relates to the R255-million asbestos tender he approved during his tuner as the Free State Premier.

In a letter to ANC President Cyril Ramaphosa, Magashule claimed he is still the general secretary of the ruling party, adding that he was suspending Ramaphosa citing the CR17 vote-buying allegations.

The suspended ANC secretary-general has defended his actions, saying he was acting under the authority given to him by the party’s constitution.

He also referred to the integrity committee to investigate those who cannot justify their actions.

Magashule said that members should act as revolutionary citizens and abide by the party’s constitution.

He called on ANC members to act with revolutionary dignity and abide by the party’s constitution.

The ANC said it noted the letter by suspended Secretary-General to Ramaphosa.

The ANC national spokesperson, Pule Mabe said the decision-making processes of the ANC are final.

He also asked Magashule to submit his discipline to the organisation.

“The ruling party has asked Magashule to respect the decisions of the National Executive Committee, said Mabe.

Steenhuisen said that Magashule and his backers would do anything to avoid going to jail while Ramaphosa’s appeasement policy has backfired badly on him.

“The farcical merry-go-round of suspensions and counter-suspensions by the ANC’s purported leaders confirms we can either have continued ANC dominance or a prosperous future for our country. But we can’t have both.”

“The ANC suspension and counter-suspensions are a clear sign that the party’s leadership is not interested in addressing the concerns of the people,” Steenhuisen explained.

Steenhuisen said since the ANC continues to rule the country, the harm it has inflicted on our society will inevitably spread, the DA will do everything possible to protect South Africa’s future in this time of crisis.