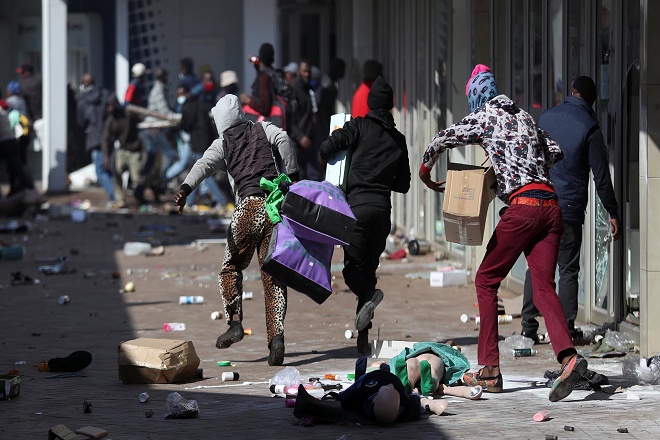 A clarion call to re-purpose South Africa’s security system comes from probably the country’s most respected observer and analyst Jakkie Cilliers, founder and former executive director of the Institute for Security Studies (ISS).

In the wake of debilitating civil unrest in two provinces, Cilliers, now head of African Futures and Innovations at ISS, maintains South Africa will face internal security problems for years to come.

He points out the failures of South Africa’s intelligence services and police coupled with an “uninspiring performance” by the military, reveal the absence of a coherent approach to national security.

“Each of these departments (Defence and Police) is in crisis. And those responsible for the judiciary, prisons and border management also face problems. Reasons include lack of vision, political interference and state capture, bad management, poor co-ordination, weak policy and insufficient accountability including through Parliament.

“It is clear South Africa has an intelligence service in name only. This is reflected in the 2018 State Security Agency report of the high-level panel chaired by Dr Sydney Mufamadi. The police budget increased by 60% in the past decade with ISS analysis showing its performance deteriorated on most key indicators. The military is in a state of neglect. All three are patently unsuited to current challenges.”

On what to do, Cilliers said several options are obvious. These include removing political interference in senior appointments, further strengthening the prosecuting authority and focusing on competence rather than factional loyalty.

As a starting point South Africa needs to unwind and reconstitute its intelligence services, including in the military and according to him President Cyril Ramaphosa must find someone with the appropriate knowledge, integrity and backbone. This “someone” should be a Niel Barnard type, he who formed South Africa’s then new National Intelligence Service (NIS) in 1979 after the years of illegality, financial abuse and political meddling under its predecessor, the Bureau of State Security (BOSS).

The Ramaphosa administration, Cilliers says, must forget about the “spurious differentiation” currently existing between domestic and foreign intelligence. “It makes no sense in the 21st century and offers no real protection against abuse of funds and confidentiality that comes with the dark arts.”

“Instead of establishing a Border Management Authority (BMA), the capabilities of Home Affairs, the SA Revenue Service’s customs and excise divisions, the SA Police Service (SAPS) and the SA National Defence Force (SANDF) should be strengthened regarding border management and related functions.

“All affected departments opposed the BMA’s establishment since Malusi Gigaba, Home Affairs minister at the time, tabled the bill in 2015. The proposed agency serves no purpose beyond additional opportunities to deploy political allies and access to lucrative tenders. Instead, government should re-purpose Home Affairs as a vital member of the economics cluster to facilitate skilled inward migration while regulating unskilled inward migration that threatens social cohesion among poor South Africans.”

On the SANDF and its management, particularly Minister Nosiviwe Mapisa-Nqakula’s Department of Defence (DoD), Cilliers asks it be repurposed for African peace support operations, border protection and support to police with “a modest additional budgetary allocation”.

“Soldiers should be trained and prepared for these functions,” he says.

Streamlining what he terms the SANDF structure and bloated ranks will allow the force to be a support and response system for national emergencies ranging from natural disasters to efforts at insurrection.

“None of this should affect defence intelligence, which should be restricted to an external mandate. State security and police should provide intelligence on domestic matters.”

Cilliers also makes a plea for SANDF “functioning provincial commands” to be re-established.

“They should mirror constitutional and provincial police structures and support them where needed,” with change is also recommended for Armscor and Denel. These State-owned enterprises (SOEs) should be tasked with developing appropriate systems for peacekeeping, counter-terrorism and border control, rather than conventional defence capabilities, is his thinking.

He wants managers held accountable for value for money and clean procurement.

“The confidentiality requirements of these departments (Defence and Police) reinforce a need for robust internal auditing, over and above oversight provided by the Auditor General.”