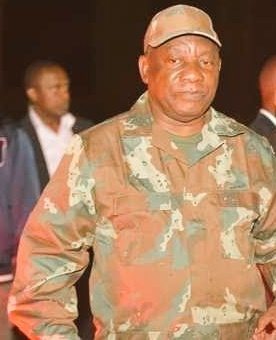 In his capacity as  the Commander in-chief  of the South African Defence Force (SANDF), President Cyril Ramaphosa says he has deployed the army to strengthen police operations to quell sporadic violence that has caused severe damage in certain areas of the country.

In his address on Monday night, he told the nation that he has deployed police crime intelligence, national defence intelligence and national security agencies to step up response to this incitement to violence.

Defence and Military Veterans Minister, Nosiviwe Mapisa-Nqakula, confirmed the deployment of 2 500 soldiers in the strife-torn areas, saying the number is determined by the costs involved and the evaluation of the situation on the ground.

Police Minister Bheki Cele said that 757 people have been arrested so far. A total of 304 people were arrested in KwaZulu-Natal and 453 in Gauteng.

The President said of concern is the loss of lives that has accompanied the incidence of violence and destruction to property.

He said that national joint operations and intelligence agencies are currently strengthening their deployment in all targeted communities.

In KwaZulu-Natal province, an act of violence allegedly orchestrated by followers of former President Jacob Zuma broke out on Saturday.

The chaos intensified in the northern part of the province, with rioters blocking roads, burning trucks, looting shops and destroying property.

In the past two days, Gauteng has experienced a series of turbulent events. Roadblocks were set up across the province, shops in the Johannesburg Central Business District and shopping malls in Soweto were looted, and commercial vehicles were burned.

“Initially, some people may try to incite violence and chaos based on ethnicity. We know that the majority of our people refuse to mobilise along these lines out of principle, “Ramaphosa said.

However, President Ramaphosa said that what we are seeing is opportunistic crime, a group of people inciting chaos as a cover for looting and theft.

“There are no grievances, no political motives, nor can it justify the violence and destruction we have seen in KwaZulu-Natal and Gauteng,” he said.

He said the victims of the current violence, including workers, truck drivers, business owners, and the parents and families of those who have died, have committed no wrongdoing.

“While these may be opportunistic acts of looting motivated by hardship and poverty, the poor and marginalized are the ones who endure the brunt of the destruction.”

He added that this has an impact on sick people since they are unable to obtain medication from pharmacies, food is unable to reach grocery shelves, and health personnel are unable to go to work.

He said the immunization program had been seriously hampered just as it was gathering momentum, and that this would have long-term implications for our capacity to consolidate some of the economic recovery accomplishments that had already been made.

The former Public Protector, Professor Thuli Madonsela, expressed her sadness as she watches people being sacrificed for personal gain and looters taking advantage of the situation.

“This is the development that those who created the scene expected to happen. It reminds me of the woman who requested King Solomon to share a kid she claimed was hers,” Madonsela added.

The National Director of Public Prosecutions (NPA) spokesperson, Adv Mthunzi Mhaga, says they have been closely monitoring developments in the violent turmoil and criminal looting in the country.

“The violence is not only criminal, it also destroys the livelihoods of many of our fellow South Africans, in particular the poor and most vulnerable, and will disproportionately affect women and children,” said Mhanga.

He stated that the NPA has full confidence in the law enforcement authorities and the SANDF to effectively address the situation and take the necessary steps to prevent further violence and criminality.